The Rotary Club of Windsor is one of the community’s largest, most active, and well-known service organizations. We are a leadership organization working together to make a difference. Our members include local business, nonprofit, professional, and civic leaders. We form lasting friendships through our shared Rotary experiences, including weekly meetings with interesting speakers, committee meetings and projects, social events, and group service projects within our community and internationally.

Learn More about Our Club 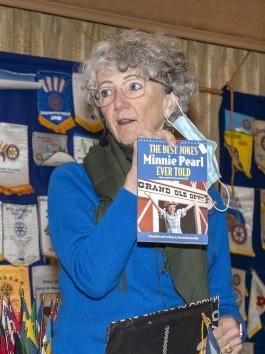 I guess everyone says the same thing about coming to the end of their year as President - "WOW...it just seemed to melt" or "I can't believe it is already over."  Well, I am right there with the rest of the Past Presidents!  The year as President was phenomenal! Closing down the 2021-2022 year and being faced with the amount of activities in which we were actively engaged takes my breath away!
Starting the year with a hopeful list of things to accomplish seemed a little overly ambitious but listening to the Board Members at our meeting on June 21st at our VARIETY SHOW was confirmation that we took "getting re-engaged" and EMBRACING the Power of Rotary in both our local and international communities very seriously!  A successful fund-raiser propelled us towards being able to contribute almost $100,000 to deserving organizations!  Winning the $1000 at the District Conference allows us to jump start our "cache" of funds and potential recipients for the 2022-2023 year!

With the ROTARY BAR open on Thursday nights at the Town Green, we are starting to successfully "re-fill" our International "Giving" Account. During this first month, we have successfully taken in almost $8000, and we are just starting the summer concerts!! Who knows what our account will be by the time of the last concert!

Doubling the amount of money for scholarships to graduating seniors put many a smile on the student faces (and ours)! Providing the hybrid meeting option allowed us to be flexible for members who were concerned about medical issues, or who wanted to stay with us while traveling!  Continuing to honor our Student of the Year (from the high school) on a monthly basis, and the Student of the Year at the Windsor Middle School, allowed us the opportunity to engage with our student recipients and get a sense of the wonderful generation that will be taking the lead for our future!  With RYLA re-opening their doors, we were able to seize the opportunity for leadership training by financially supporting two students!  Under the Rotary Youth Exchange Program, two of our dedicated students are headed out on an international exchange, one to Sweden and the other to Japan!  We are gradually welcoming three short term students and two long term students over the next couple of months!!  Rotary Youth Exchange is the heart of Rotary, and Windsor Rotary Club has always supported the "beating of this heart!"

Regular recognition of the Rotarian of the Month, has allowed eleven members to be highlighted for their service to our club - deservedly so! Paul Harris recipients have been regulars this year, and the Windsor Rotary Community Foundation swelled to over $1.5 million dollars, thanks to a very generous donation by one of our (now deceased) members, which will allow us to continue to give back to our community on a regular basis!  The new Ken Moulton Educational Fund grew to almost $40,000 without any formal advertising.  This annual scholarship allows for a student from the Alternative Education program to continue school, post high school!

Our teachers were finally able to be honored in person, with the TEACHER of the YEAR program where 8 outstanding teachers were recognized for the dedication and service to the students in the Windsor Unified School District!  Our Website was re-vamped and brought into the 21st century where it highlights not just our upcoming events, but gives a great description of who we are and what we do and includes our weekly Bulletin with photos!! Members got a big taste of technology during COVID where our meetings were EXCLUSIVELY held on Zoom.  The advantage was that the WALL OF FEAR that was associated with technology was broken down, so that the world of DACdb was re-introduced, and opened the door to being able to more effectively communicate amongst the club members and beyond!  We are still getting to know it, but we have rounded the corner on accepting the benefits of technology!!

We opened the doors to working with the VETS through Nations Finest; we found ways to raise funds for Ukrainian causes; assisted in raising funds for our out-going exchange students and supported "pop up" fund raising for an air conditioning unit in Mexico, to name a few !  We embraced the newest area of service that addresses the environment with fervor!  And, you brought me gifts from your travels from all parts of the world, which were the foundation of some of these fund-raising activities!

Socials invited us to take the train to Petaluma for a meal, to have our first Holiday party in a couple of years, to home host the District Governor for dinner and cocktails and to explore the new WINDSOR BEVERAGE DISTRICT.

Monthly "reader's digest" Board meeting reviews gave members a heads-up on what the club was doing or thinking about doing.  We successfully re-did our by-laws bringing us up to date for our Windsor Rotary Community Foundation! Our membership grew by 14 new members!  We grew more than any other club in the District!!  The Three VARIETY shows allowed the club members to see the broad talents of our Board members, and gave the members regular updates on the progress of our Club Goals!

I have probably forgotten some of the amazing things that we accomplished this year!  I can say that we kept very busy at every turn!  I want to express my thanks to each of you for all that you gave to our club and our community this year!  It has been an absolute honor to be your President this past year!  You gave me strength, confidence and a strong footing upon which to stand tall!  The Debunking was AWESOME!! I don't know when I have laughed as hard as I did - and who else gets to hug their arresting officer??

I am excited about all that awaits us in the next few years as we tackle the new and exciting challenges that are being presented!  Candidly, I am also looking forward to being seated with each of you next year, as President Brian takes hold of the gavel!!

The weekend of May 20-21, District 5130 held its annual convention in Fortuna, California, in Humbolt County, where there are a lot of trees. The theme was “Rockabilly – Rocking in the Redwoods.” This weekend there was not a lot of serious business conducted, except for the gathering of most if not all of the outgoing district Youth Exchange students.  You can see them lined up holding the flags of the countries to which they will travel as they expand their life experience with Rotary.

District Governor Dustin Littlefield presented President Pam with a Club Achievement award for our work over the past year, and especially for our Passport to Success program which Renee Hyde spearheaded and is providing great guidance in building a powerful new membership program.  Later, Pam’s wardrobe crew switched her out of rockabilly wear into Marie Antoinette, suitable for the Windsor Rotary “Paris Bistro” themed hospitality suite in a corner of the ballroom.  French cafe music blared, Brian Ling served up “Les Drops de Limon” in martini glasses with blueberries in a fabulous mélange of mixed metaphors!  Wally and Hack mimed in invisible glass walled boxes and Carol welcomed artistes to color in her paint by the number poster of le Gouverneur de District (behind the picture of Carol and JB).

Speakers at each meal discussed how Rotary changed their lives, and also the long fight to admit women to the Rotary Club of Duarte, CA, which apparently consumed most of the 20th century, finally ending up in the Supreme Court where RI lost, and women won!

Good time had by all?  Apparently!

Through Rotary clubs, people from all continents and cultures come together to exchange ideas, and form friendships and professional connections while making a difference in their backyards and around the world.

We take action locally and globally

Each day, our members pour their passion, integrity, and intelligence into completing projects that have a lasting impact. We persevere until we deliver real, lasting solutions.

No challenge is too big for us

Together, we see a world

where people unite and take action

change across the globe,

in our communities, and in ourselves.

Together, we see a world

where people unite and take action

change across the globe,

in our communities, and in ourselves.

The Mission of Windsor Rotary
The mission of the Rotary Club of Windsor is to serve our community and the world. We strive to better communicate with our members and with the community to inspire and mobilize both our local and global community in health, education, and peace to create transformative change.